Salut! Let’s start our conversation from your introduction! What is your name? How long you are member of nationalist movement? Do you remember why did you become nationalist?

My name is Mário Machado and i’m a nationalist since i was 14 (1990). At 15 i joined my first nationalist organization FDN (Frente de Defesa Nacional), and after this date (1990) until now i kep active in the movement in various ways. I became a nationalist because i had a strong patriotic (and above all anti-communist) environment at home, since my family was robbed by marxists after the coup of 1974, and after this all developed naturally.

You are a head of Portugal organization New Social Order (Nova Ordem Social). When and in what circumstances, it came into being? Why did you chose such specific name?

Modesty aside, i believe i was always kept in high esteem by my comrades, and even at times when i didn’t want it, they elected me as their leader, which is an honor. Today i accept that naturally, mainly after i understood that after my imprisonment, the movement collapsed and disappeared into the most tiny insignificance. Now it’s the sense of duty, that prevents me from declining this responsibility, that i hope is temporary, until the right person for leadership appears.

The NOS appears within the walls of prison, to fill the gaps e errors in the activism within our movement. The choice has double meaning, NOS means ‘we’ in portuguese and in full it means we want a new social order for our country. It was since the beginning an established decision that the word social needed to be present!

What kind of group NOS is? Do you want to build broad, popular movement or maybe you are focused on some kind of closed, elite group? In what cities in Portugal, we can meet your activists?

We are a political movement whose main goal is the expansion and indoctrination of the portuguese so that every day more and more of us can understand and join our cause, and in the future the revolution. We want at a certain time, when we have adequate infrastructure, run for elections, because this is also a way of struggle. We are not elitist, we are the people and we talk to the people.

We are present in 16 regions but we want until the end of the year increase substantially our geographical implementation. We are stronger in numbers in Lisbon, which is also the largest city in the country, but we have activists in towns with a few thousand residents.

I would like to ask you about your activism. What is it based on? What kind of actions do you organize? What are you focusing on? What purpose do you want to achieve?

We are still very young in the nationalist movement, but we want to follow the steps which the portuguese Frente Nacional (an organization that became extinct with my imprisonment), trailed, with demonstrations, gatherings, propaganda, conferences e all kind of activism possible. We want our organization to become one that conquers the streets, like the FN has done in the past. And we will do it!

Please tell us more now about your ideology. How would you describe it? Do you support Third Position? Identitarism? What characters and groups you are inspired by? What do you think about heritage of such figures as Rolão Preto or António de Oliveira Salazar or Integralismo Lusitano of António Sardinha?

Yes, we identify with those terms. We are Third Positionist because we adhere to the ideology essencial principles; opposition to both capitalism and communism, opposition to multiculturalism, defense of the right of self-determination of the peoples, the primacy of the spirit over matter, etc.

We are also identitarian for we valorize our ethno-cultural identity (portuguese and European), and we consider it the connection link of society which defines the natural extension of family. It’s a patrimony and the central value of our struggle, we love our people, our identity, and we see it as something with intrinsic value, above any individual interest.

The names of portugueses 20th century nationalism which you mention are important references to our movement, and a source of inspiration, as they must be. But we want a modern portuguese nationalism, turned to Europe and adapted to the world of today.

When we talked about Salazar, I must admit that he is well known figure amongst Polish nationalists, and even we, in Third Way, are inspired by his legacy when it comes to economic questions. So it worth asking you: what kind of economic system do you propose? Capitalism, socialism or maybe something else?

We support a Third Positionist model of economy. Of course we don’t oppose private initiative, nor the existence of great entrepreneurs, but we think that the economy should be subordinated to the Nation and that we shouldn’t allow private interests to influence the government decisions.

For the superior interest of the Nation we support the nationalization of the key-sectors of economy and the banks.

It is more and more often raised issue recently, so it is impossible for me not to ask you about it. What is your vision of Europe? What is your attitude towards European Union?

Europe is very important to us. We see it as a Nation (or meta-Nation) of which Portugal is an expression. A biocultural entity the precedes and transcends any political or juridical construct, a civilization, a value in itself, that extends it’s presence beyond the European continent including all peoples of the world ethno-culturally related to us. From Russians to Afrikaners, from Greeks to the Gaúchos of southern Brazil.

In today’s world of great civilizational blocs, emerging powers and modern challenges, we think the European peoples from the whole world have an extremely urgent necessity to unite, and we think this union should be accomplished under the form of a federation. A federation in which each people maintains a certain degree of autonomy and preserves it’s identity, having it’s own state. However we don’t think Europe should unite only for utilitarian reasons, but because we see it as an intrinsic and superior value.

In regards to the EU, the ideal would be that it unified and transformed itself into a nationalist political entity supporting the interests of Europeans. Unfortunately we think this possibility is very unlikely. However we have a lot of hope in the Intermarium project, in which your country can participate. Western Europe is too much infested with cultural marxism and it will be a difficult and slow process to change the culture through metapolitical struggle. We think that unfortunately it is well possible that the disastrous multicultural policies will cause an ethnic civil war in the West on the long-term.

However, eastern Europe retains some health and is without doubt the bastion of Europe at this point. We hope that Poland, Ukraine, Slovakia, Hungary and other eastern countries can unify to create a geopolitical bloc able to one day help recover all that was lost and destroyed in the European world, and be a platform for the creation of the federation we dream of.

Are there a lot of refugees in Portugal? How does immigration crisis look in your country? How your government reacted on it? Does it affects positively on popularity of nationalist associations in Portugal?

There are not many if we compare with countries like Germany, France or the UK, for obvious reasons, however they exist in enough quantity to cause some problems. Besides the economical, social, and identitarian problems they bring, being non-European populations and thus non-assimilable, we had already cases of extreme violence in our country due to this migratory phenomenon.

Some months ago, in Albufeira, a refugee from Eritrea who was receiving a monthly subsidy and had housing provided by the state, raped a homeless woman and brutally beat her causing her severe injuries.

Nowadays the subject of refugees seems to not have a great impact in Portugal, but there was a time when nationalist movements could try to profit from this, by pointing out how stupid the measures of our government and other european governments are.

I would like to ask you: what is your attitude towards revisionism, chauvinism and cooperation between European Nationalist Movements? In what countries NOS has friends?

I support freedom of investigation and opinion, but unfortunately, after the decision of the supreme court of justice, it’s now also a crime in Portugal to express doubt about official numbers or what are considered historical facts.

Thus, NOS doesn’t support historical revisionism nor could it do so, since it would always be limited in freedom of expression.

We find cooperation between all nationalist movements essential and we are against any type of antagonism between European peoples. We believe it’s up to nationalists too, to foment comradeship and brotherhood between European ‘carnal homelands’ and it’s peoples. NOS has friends in the Nordic countries, Ukraine, Italy, Germany, and Poland, of course… and also in other places of the world.

This is kind of our traditions here: last words belong to you:

We thank you very much for your interest and for being willing to establish connections with us. Your movement and even your country is an inspiration for us. We would love to be able to visit you one day and participate in one of your political events, and we would have a great pleasure to receive you here as well. It’s essential that we are united internationally, including because our enemies also work at an international level. Fraternatal salutes! 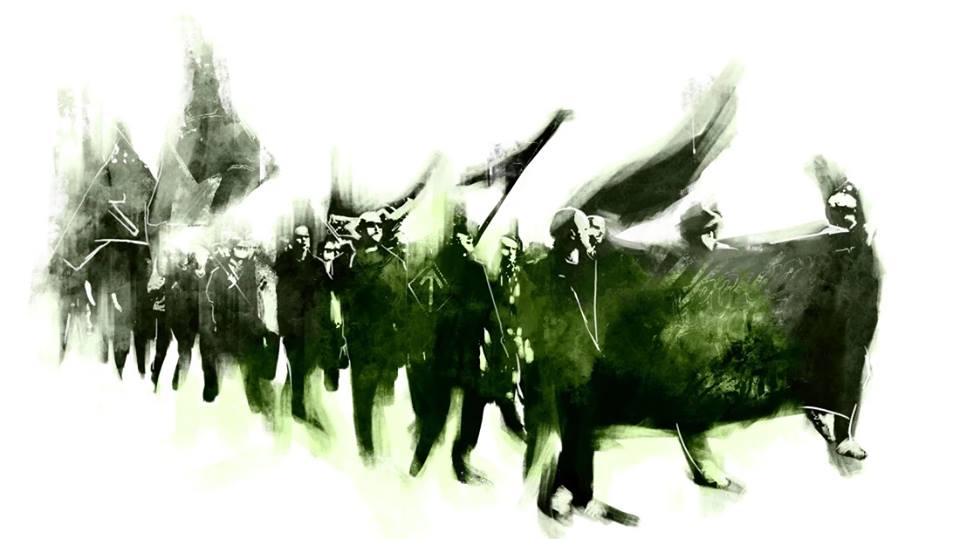