Salut Ruben! Before we get to the proper part of our conversation, please introduce yourself to our readers: please tell us a little about yourself. When and under what circumstances you have became a nationalist? Are you associated with any nationalist groups? Maybe you are member of some specific nationalist projects?

Hello! I am Ruben, 30 year old Belgian and active since I was 15. I had an opportunity to travel to many countries so my view on the term 'nationalist’ can be a bit different probably than yours. I’m from western Europe so you can imagine that every area and country here has its own culture on this. In Belgium we have NATO, EU, mass migration and so on. Very complex situation at this moment because the big migrant groups are starting to fight between each other and with the waves they bring their conflicts and interests with them. Our countries totally changed. reality changed even though many people refuse to realize it.

I used to participate in many projects but during the years I saw that many 'nationalists’ are not better than the members of the society that they claim to fight against. So I decided to take a totally different stance these days and to try new ways to achieve the minimum of our objectives. I am sick of hearing people who claim they want revolution or change but all they do is trying to make some money or to be 'the best of the rest’. Not my cup of tea.

This is why i decided to start working on geopolitical projects and to support areas of our friends that can still be developed. Western Europeans have mostly more financial possibilities than in other countries and this is some advantage we should use wisely. 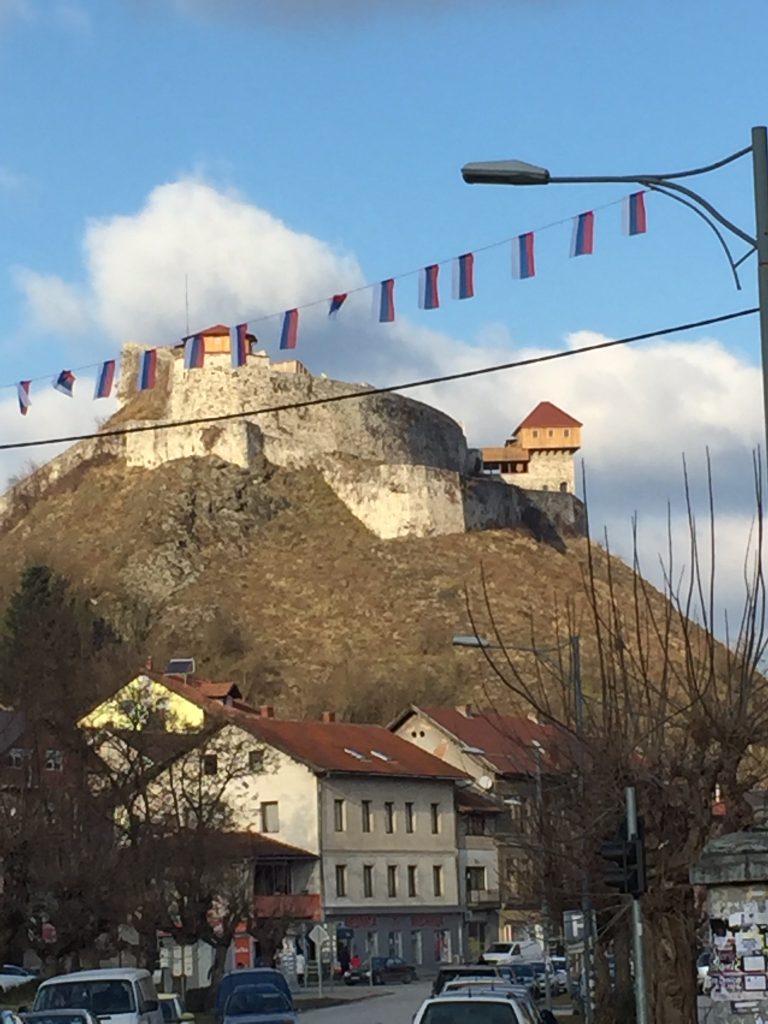 In Poland, topics connected with Serbian Kosowo are rather well-known. There were many banner and ultras choreos „Kosowo is Serbia”. People from Autonomous Nationalist Movement organised every year rally in Warsaw for Serbian Kosowo. Lately, thanks to effort of nearly whole nationalist community, action of Polish ESFK: „Helpful hand for Serbs” was a great success. But to be honest, if you will ask anyone about situation or simply about Serbian Republic, not many people will be capable of giving you specific and concrete answer. How you came up with idea for such trip? Why exactly you chose Serbian Republic?

Well people in western Europe always think that the east will save us. However when you take a closer look at the Balkan you see that situation is very bad there. Strangely enough we mostly forget about the Balkan and people would go to Palestine and Tibet while Republika Srpska is very close to us. It was totally out of our minds and that made it fascinating for me. For sure when we saw the referendum for St-Stephens day last year. I am shocked and angry that not more people pay attention to the situation in Bosnia, this while the entire federation is becoming a colony of rich Arabs! 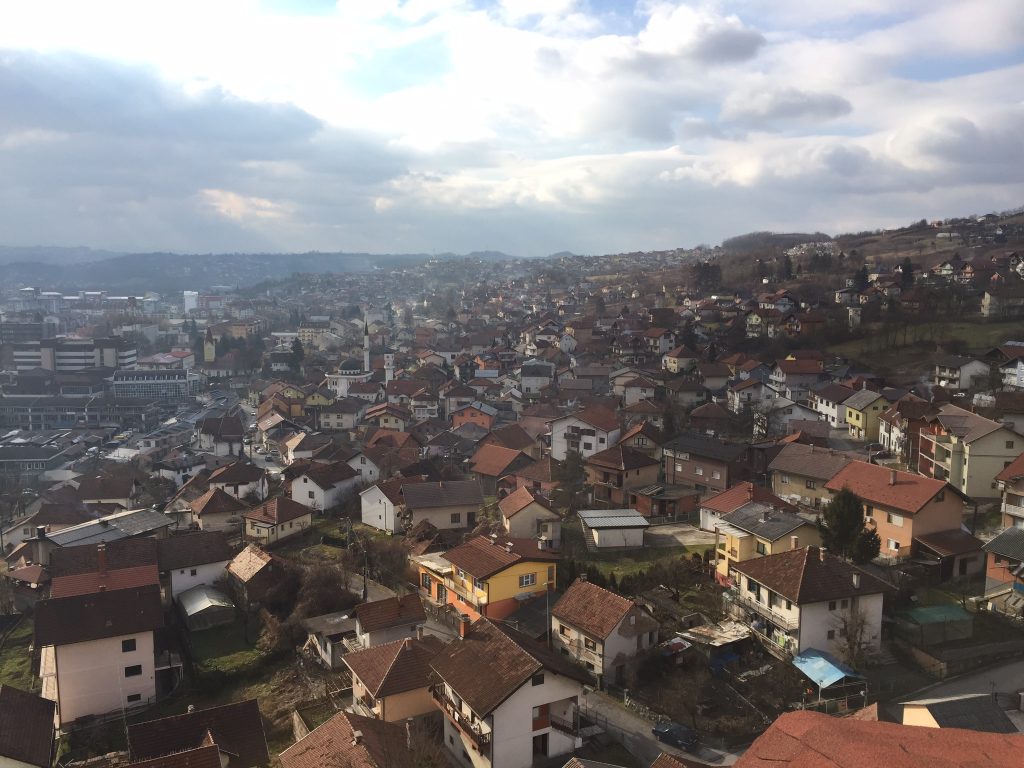 How your trip looked from „technical side”? In what part of Bosnia and Herzegovina, there is Serbian Republic? Does it have own separate, internal boundaries? People use there different currency than in Bosnia? People from abroad, need some documents or visas to get there? Are there any active airports?

Serbian Republic is in the north and the east of 'Bosnia’. It is one of the 2 entities that make the country. In the other part that Serbs call 'the Federation’ there are Croats and Bosniaks living together. It has own internal borders, own police forces, own parliament, own foreign policy. The currency is the convertible mark. It is like half the value of the euro. As a EU citizen you can enter Bosnia and Serbian Republic without visa. There is one airport of Banja Luka but it’s still very small and not often used. You can fly to  Sarajevo, Belgrade, Zagreb or Dubrovnik and drive from there to Republika Srpska. 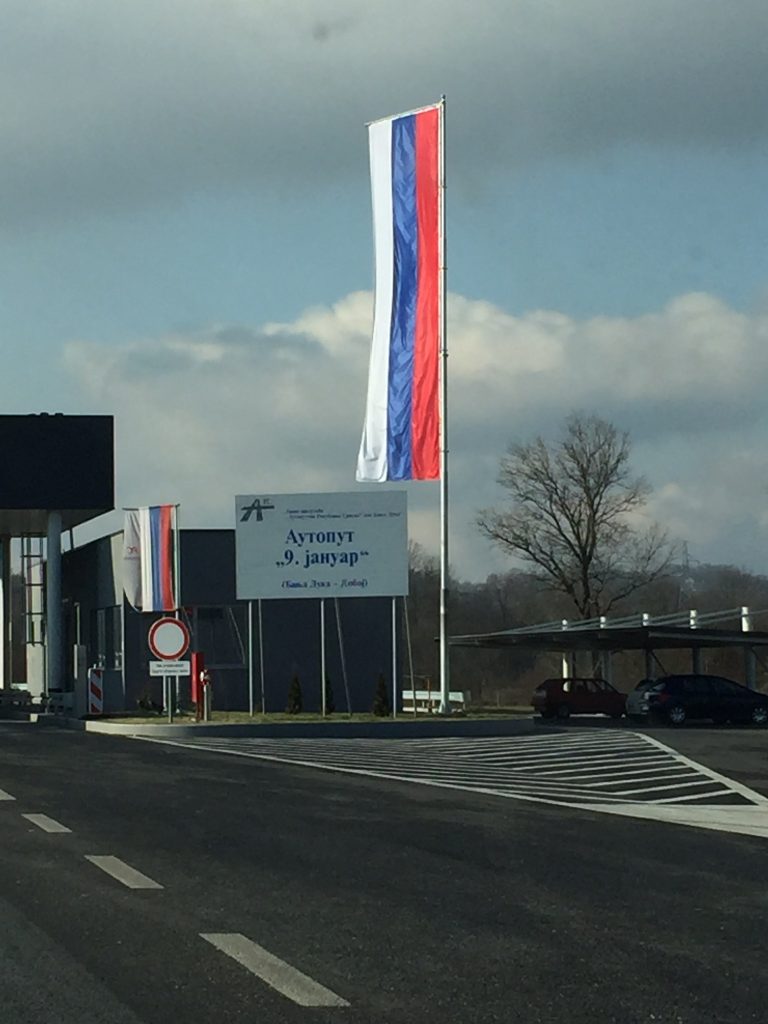 What was your first impression when you reach Serbian Republic? What do you remember from this moment? What came to your mind at first sight then?

Our first entry to Republika Srpska was in Gradiška when we cross the Sava river. It’s a very calm area. We are of course not used anymore to see border crossings. Also not used to see mosques, catholic and orthodox churches in the same village! Strange to see. Of course the area is also a bit less developed so you feel like going back in time. Good thing is that there is still lot of green and no buildings that reach the sky.

How long have been in Serbian Republic? In what cities/ villages? What is worth seeing there? What can you recommend us, the most?

We visited Prijedor, Banja Luka and Doboj. For shame we couldn’t visit Trebinje this time. Surely we will visit it the next time. The most beautiful is the nature. Here in western Europe we only have cement and less grass and forests. Thank God you still find too many rivers and forests in Republika Srpska. And old castles of course. Tell us more about people who live there. What can you tell about their character? What they do for living in most cases? What is their standard of life? What do they think about people who come to Serbian Republic from abroad?

People in Serbian Republic are Serbs so they are very good to their guests. Many of them studied abroad so they are very open to us. Standard of living is still low just like in the entire Balkan region so many people emigrate. People are simple and not arrogant. They are hard workers.

Everybody knows what is a situation of Serbs in Kosovo. Hundreads of people live under rule of „occupation government” like second-class citizens. I am curious how federal government of Bosnia and Herzegovina treats residents of Serbian Republic? How ordinary Bosnians treat them?

People in Bosnia didn’t forget the war yet. Serbs feel Serbian, Croats feel Croats and Bosniaks look at the muslim world to find their friends. Serbs told me not to visit Sarajevo or Mostar cause people wouldn’t be nice to us if we said we are friends of Serbian people. The international community hopes that all people there will ever feel 'Bosnian’ but this will never happen. You can compare it to situation in Cyprus where international society tried to make Greeks and Turks feel „Cypriots”. 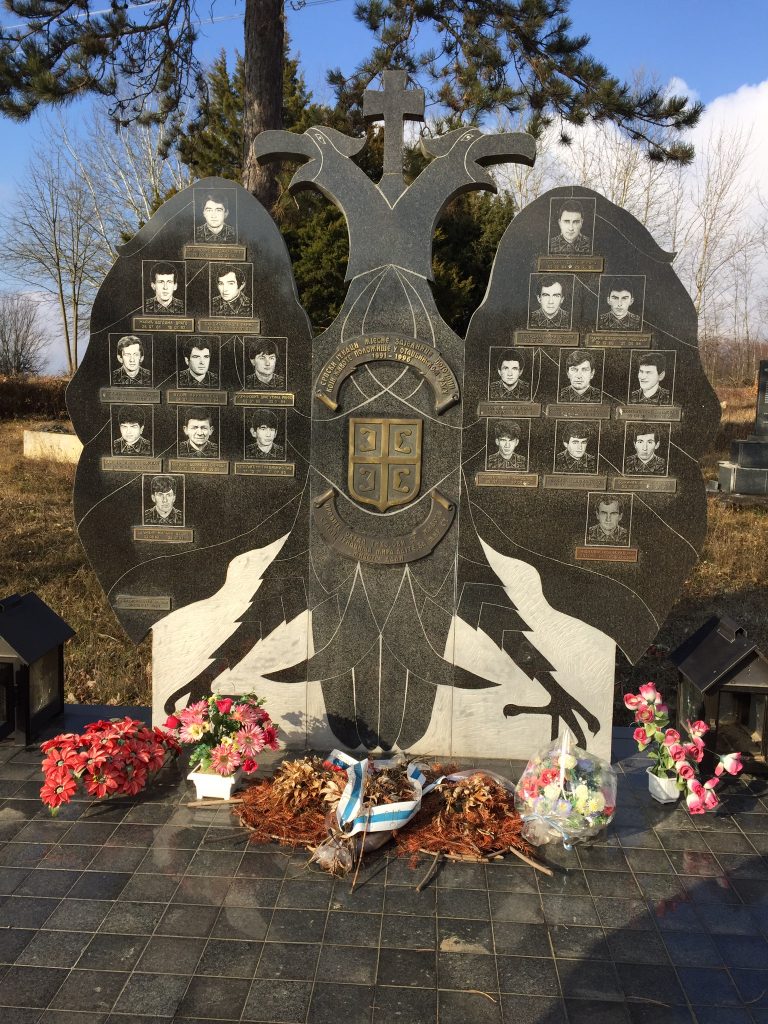 Are there popular revisionist moods amongst the people in the Serbian Republic? Do they want to come back to/ unite with Serbia? People there are patriots, or not? Are there any active and organized radical, nationalist groups there?

People are afraid of a new war. Don’t forget its only 25 years ago. Many people lived it or were born then or lost family members. Residents of Serbian Republic considers themselves as Serbs but they are sad that Moscow supports them more than Belgrade. Just as Moscow does more for Kosovo and Metohija than Belgrade itself. There are several projects and parties but I prefer to talk about the people itself and their interest. Majority of the people their feels Serb so this feeling is not in the opposition like in many other countries. We shouldn’t divide the people on party or groupuscule lines.

Lastly, I would like to ask you, not about present, but about the future. What do you think about situation in the Balkan peninsula? Are there possible any changes on the political map of the whole peninsula?

Generally not very positive. Most of the peoples hate each other and in the meanwhile the US occupying forces and the Turkish/Saudi radicals get stronger and stronger day by day. People talk about Kosovo but situation in Bosnian federation is the same or even worse. People there should stop thinking in tribal terms and realize the fight is today and not yesterday. I can also start crying that i want war with France for the area of Lille but will that make reality better? 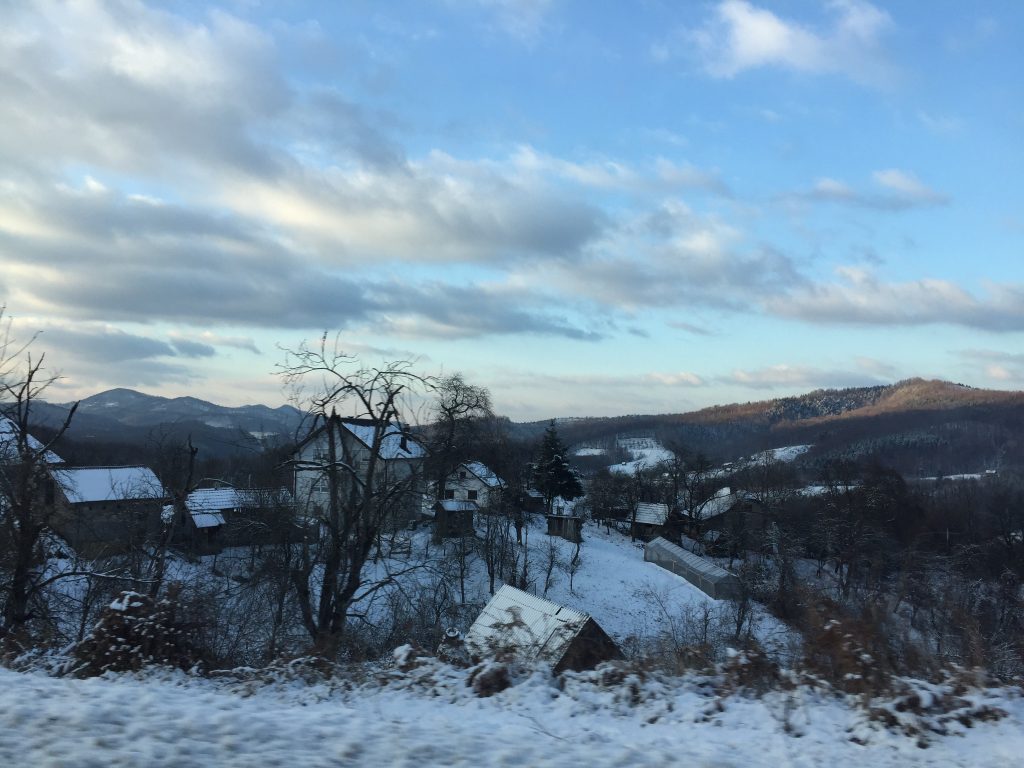 This is kind of our tradition here, last words here belong to you:

I want to thank you for giving me the chance to speak for you. I am always happy to talk to young and motivated people. Its essential that people understand how they can really contribute and change things step by step. I hope they don’t make the same mistakes as many others, including myself, did. I am happy to share my experiences with everyone who is interested. There are many concrete things that we can and are going to do, but of course i can’t make them public for our enemies.

All photos in this interview are published thanks to our interlocutor 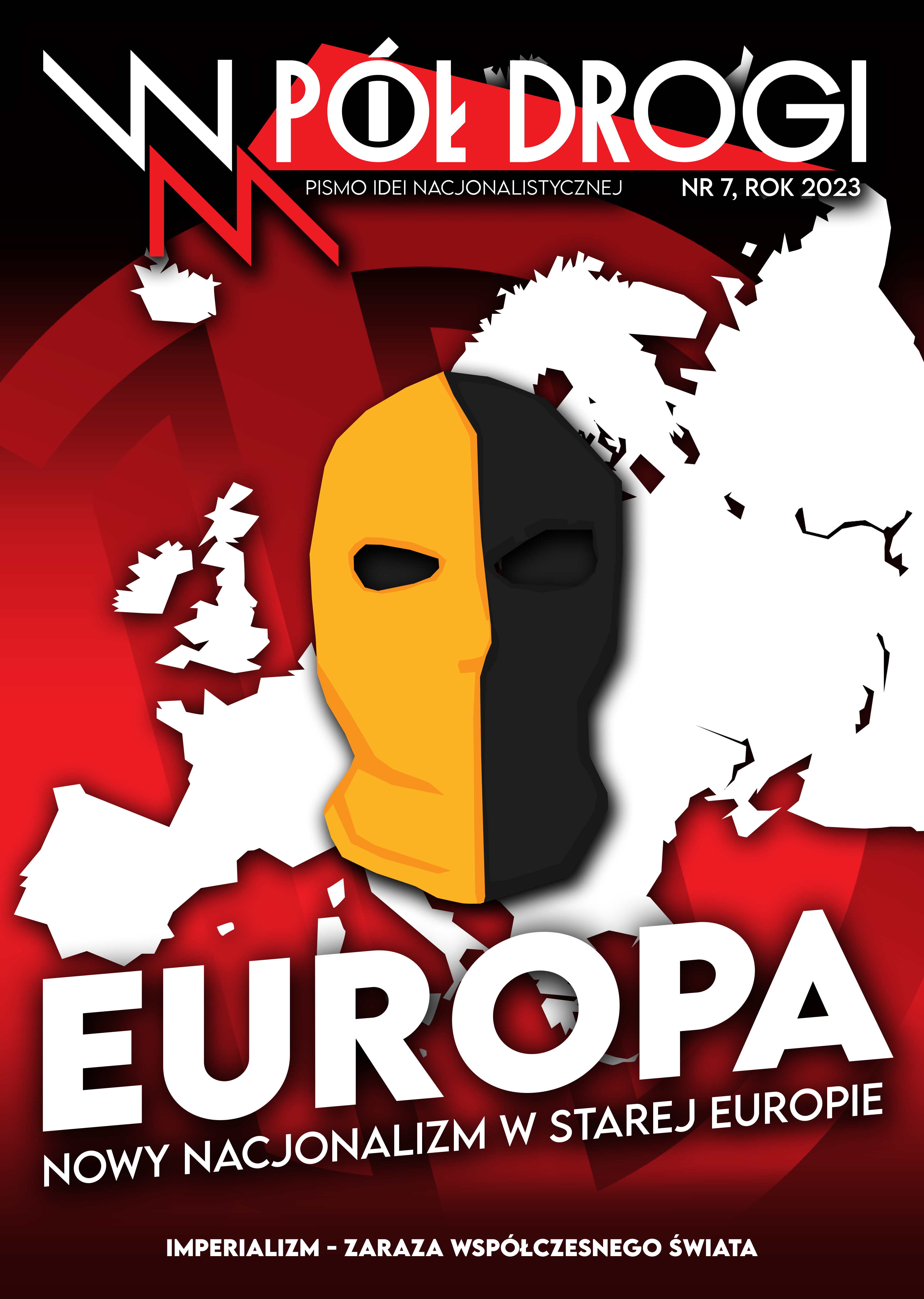